The most talked about table in Egypt: World’s longest table, between success and criticisms. (video)

Despite the strong bashing that this endeavour has received from people who were present at the event as well as those who weren’t and just know about what happened from hearsay. This was undoubtedly an attempt made with good intentions.

Everyone thought it was a great idea at the beginning, even though no one really fully understood the concept. Was it a ma2edat rahman? Was it a fun gathering where people brought their food and went out to have iftar together? It wasn’t very clear. And that is probably where the confusion happened. 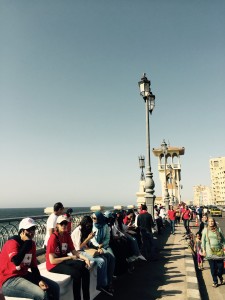 I was personally driving in the streets around 8pm that day, one hour after iftar, and I could clearly see the mess that has resulted due to the lack of organization. I saw on several occasions food cars from big restaurants blocking the streets to distribute food to people who were crammed around the vehicle, completely jamming the road. But what can I say? These are people who have been fasting all day and I could not imagine how they must have felt having to wait for one more hour so they can eat. These people thought they were promised food and didn’t expect to starve until it arrived.

The problem with this is the same inherent problem with most projects in Egypt; the lack of organziation. We might have the best idea in the world, but there is always a small hitch that gives people the opportunity to trash the idea.

In this case the initiative was very a good one, giving Alexandria the chance to shine in the Guiness World Record for the fist time, with an idea that brings out our Egyptian unity. But with one small problem in some of the tables the image of the whole thing was shaken.

The same video of people trashing the tables and throwing them in the streets went viral on social media, with people leaving offensive comments about the governor. Rules had to be set from the start; defining exactly how the event would go,
choosing specific restaurants to cater the gathering, and signing contracts that laid out the rules and ensured timeliness.

“Egypt’s Mediterranean city of Alexandria seeks to enter the Guinness Book of World Records through preparing the longest Iftar (meal to break fasting) table extending for three kilometers along the citys coast side on June 26, 2015.”